Back Bay Station Complex Still Full of Question Marks, But Sure Looks Wowza 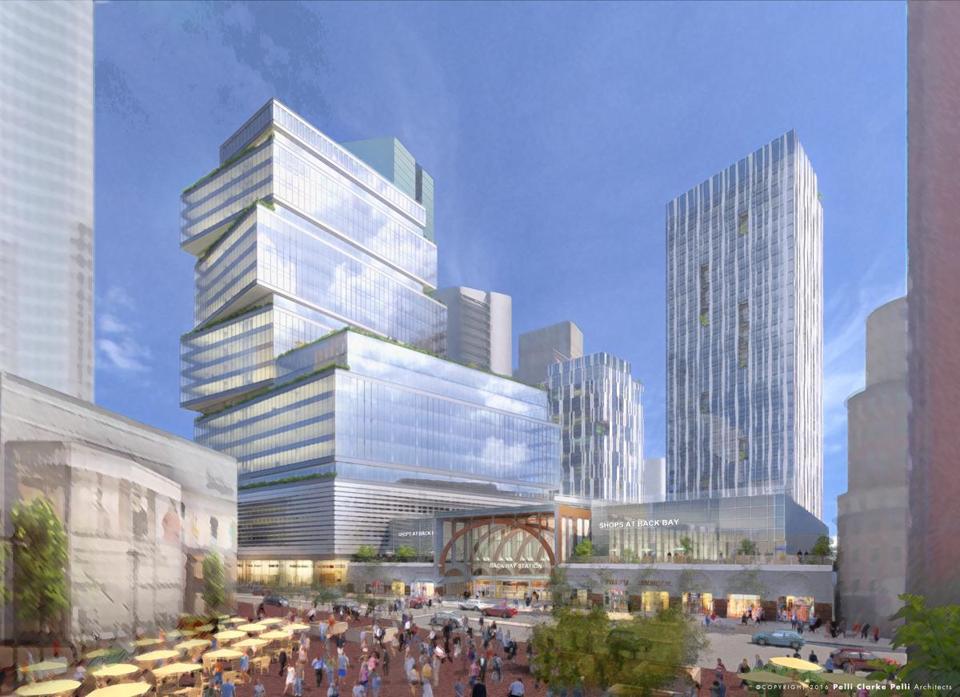 We've known for quite some time that Boston Properties, the developer behind several projects, including that ginormous TD Garden to-do, wanted to build a big complex above Back Bay Station. The company would use air rights from the state gained in part by a commitment to sprucing up the transit hub.

At the tail end of 2015, Boston Properties detailed these plans like never before: a complex of residences, offices, retail, and whatnot running to 1,400,000 square feet. Those plans, detailed as they were, still left questions such as what kinds of residences (condos or apartments?) and the heights of any towers.

Now, Boston Properties is out with yet more specifics via a filing with the city (PDF). The Back Bay Station complex is slated to include three towers of 26, 28, and 34 stories, with the shortest one for offices and the others for approximately 600 residences. The square-footage would now total some 1,260,000 square feet; and would include, per Jon Chesto and Tim Logan in the Globe, "a new floor or two" above the current station's concourse "that will likely host a supermarket and department stores."

The new filing also included these snazzy renderings, courtesy of Pelli Clarke Pelli and Arrowstreet. And yet! We still don't know whether the residences will be condos or apartments (Boston Properties says that market conditions will dictate that decision). Nor do we know when everything will get built or even started. The developer says it wants an anchor tenant in place before construction would start on the office tower. The commencement dates of the residential ones, too, would be tied to the buoyancy (or not) of the Boston housing market.

Finally, ancillary decisions such as whether to close the westbound ramp to the Turnpike from Clarendon Street are still up in the air, too, as are necessary permits at the city and the state levels. Nevertheless! These renderings look really neat. Stay tuned.